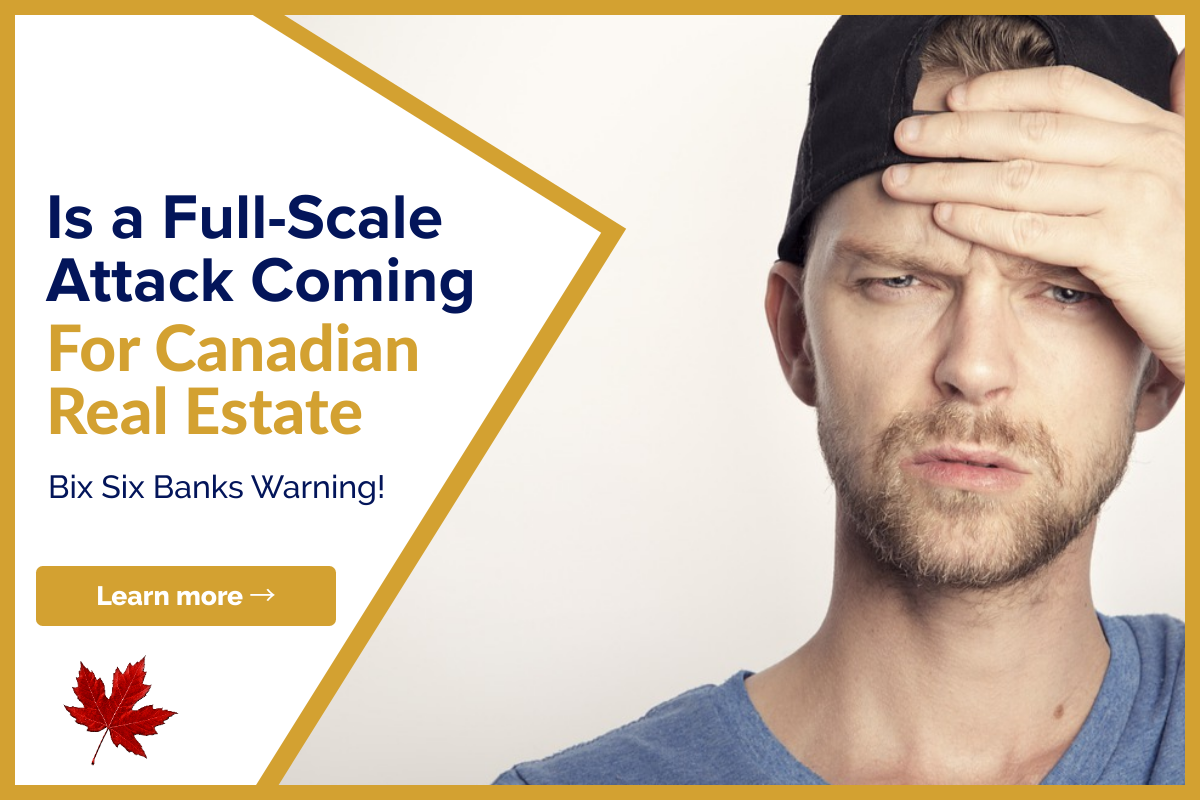 Now you can listen to our blog post”Big Six Bank Warns Canadian Real Estate About “Full-Scale Attack”, while on the go.

According to a new poll from Scotiabank, many Canadians are putting their plan of buying a home on hold. Reason? The record-high prices. In a news release, Scotiabank’s head of real estate said that “it is no surprise that a storm of the rising cost of living, housing supply shortages, and increased demand has caused Canadians to feel like homeownership is out of reach.”

Younger Canadians are feeling the heat even more about the housing market. According to the survey, 56 per cent of respondents aged 18 to 34 said that their current economic environment had led them to halt plans to purchase a home. Meanwhile, 62 per cent said that they were waiting for prices to fall before buying.

The Canadian Real Estate Association data show that the average home price in Canada has increased by more than 20 per cent since last year and reached a record level of $816,720 in February 2022. In the same month, Canada’s inflation rate climbed to 5.7 per cent, the highest since 1992. What is terrible is that there is no indication of prices dropping any time soon.

The poll also found that more number of Canadians appear willing to move further away from major cities to get more value for their money, with 35% of respondents in 2022 reporting they are considering it, compared to 29 per cent in 2021. The number rose to 49 per cent for younger Canadians and 39 per cent for Ontario residents.

So, what does it all suggest? There is a full-scale attack on Canadian home prices across various policy levels. Let’s explore what it all means.

Canadian real estate’s primary difficulty is market forces. As the Bank of Canada (BoC) acted late on inflation, it will need to use a lot more firepower to control it. At the exact time, the highest inflation stimulates the Government of Canada (GoC) 5-year bonds to higher. This combination will make both variable and 5-year fixed-rate mortgages surge higher.

Mortgage rates continue to surge, with a bank of Canada expected to accelerate its tightening pace with pair of 50-bp moves. Five year fixed rates are already around 49, and variable rates should be well into 3% by early summer.

Canadian real estate is gearing up to cope with foreign buyers. Ontario hiked its non-resident tax to 20 per cent and expanded it to the whole province. Before this, the province tax was 15 per cent and only applied in the Greater Golden Horseshoe. For our non-Ontario readers, that is the economic area around Greater Toronto.

The non-resident buyer tax in Nova Scotia is 5 per cent of the purchase price, much smaller than other taxes. However, they plan on adding a 24 per cent annual tax on property owned by non-residents. The higher regular carrying costs can reduce profitability or get passed on to households. It depends on other factors like crediting liquidity to test how it reacts.

More to Come From Canada’s Federal Government In Weeks

Improvement steps are coming from Ottawa in the coming week. Ottawa leaves Canadians guessing on policy movements, but the vacant home tax is almost all done. Canada’s department of finance is also working on the details. Currently, there is debate on wide loopholes, but the tax is essentially psychological in the first place.

Looking For Mortgage Lenders in Canada? Lionsgate Financial Can Help!