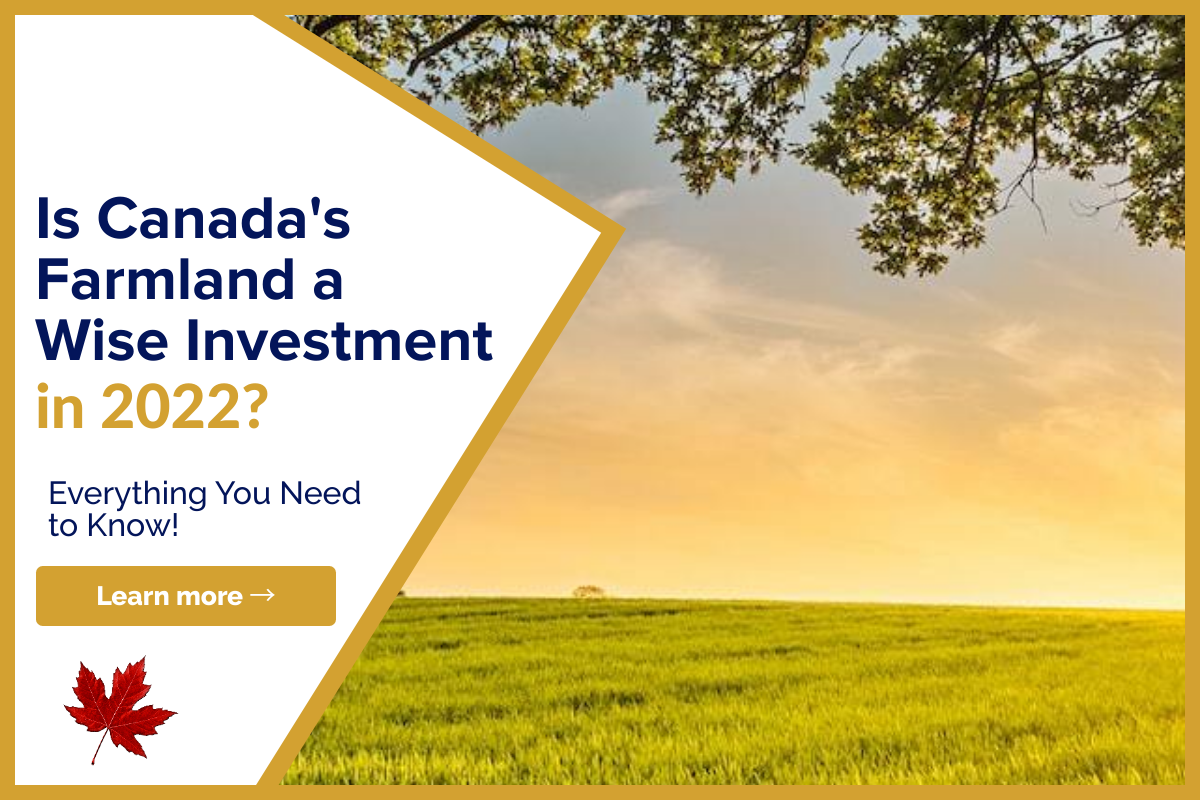 Now you can listen to our blog post, “Is Canada’s Farmland a Wise Investment?” while on the go.

The world’s economy is on track for its most severe decline since the Great Depression due to COVID-19. Canadian farmland is becoming a more dependable and resilient investment as the leading economies of the globe are on pace to see their worst quarterly fall in history.

Canada is one of the world’s top producers and exporters of agricultural goods. According to Statistics Canada, the nation exports agrarian products in the fifth-largest volume.

With approximately 300,000 people employed directly and contributing 5% of Canada’s GDP, agriculture is one of the largest industries in the nation. The scale and significance of Canadian agriculture and related businesses will increase along with the global population.

Should You Invest in Canada’s Farmland?

The scale and significance of agriculture and related industries in Canada will increase along with the global population. The best bet for investors is Canadian farmland.

Below are some of the reasons which explains why you must invest in Canada’s farmlands and how it can be a good investment.

Additionally, it is anticipated that 90 per cent of currently available arable land will be needed to produce up to 70 per cent more food to support this growth. Global agriculture will invariably appreciate as a result of this.

According to elementary economics, prices will rise if demand rises, but supply remains unchanged. This implies that increasing food prices and limited arable land will cause farmland values to grow.

Statistics Canada states that the average cost per acre of farming in 1988 was $464. During the same period, American farmland cost the equivalent of C$885 per acre, according to the U.S. Department of Agriculture. In Canada and the United States, the average cost of farmland per acre in 2018 was over $3,000 and over $4,000, respectively. Based on this historical data and the outlook, farmland investment has a promising future.

I gained perspective on the distinctive value of Saskatchewan agriculture through my work as senior management of an agriculture company for the better part of a decade. The Canadian Prairies, where agriculture is a significant economic force, have seen higher rises in farmland value than other parts of the nation.

The province of Saskatchewan, which is “home to more than 40% of Canada’s cultivated agriculture, some of the most prolific land in the world,” claims to be the source of that information.

Farmland ownership in Saskatchewan has historically been more constrained than in other provinces, resulting in a lower price per acre. The cost per acre in Saskatchewan is increasing as a result of Saskatchewan’s high soil quality and relaxation of buying restrictions over the previous ten years. This indicates that upcoming investments are expected to result in profitable returns and capital growth.

According to Farm Credit Canada’s 2018 and 2019 reports, Saskatchewan’s farmland values increased by 6.2% on average over the past three years, compared to 4.9% in British Columbia, 3.3% in Alberta, and 4.2% in Manitoba.

The Heide family, Avenue Living Agricultural Land Trust, and Andjelic Land Inc., some of the largest farmland owners in Saskatchewan, have benefited from farmland appreciation due to their wise investments.

The constancy and stability of farmland over stocks may be shown compared to the Toronto Stock Exchange (TSX) growth, Canada’s leading stock exchange, over 11 years from 2009 to 2019.

Even though the TSX increased by more than 30% in 2009, more than 10% depreciation occurred in three years. On the other hand, over the same 11-year period, cropland steadily increased, ranging from 5% to more than 20%.

Investments in farmland are likely to continue to generate substantial profits due to the anticipated expansion in the world’s population, the demand for food, and the current shortage of arable land.

Farmland has historically increased in value as population and food demand worldwide have grown. Additionally, adding value to portfolios, farmland has shown to be more predictable regarding appreciation than equities markets.

There is still room for investment in farming, and significant value is to be gained. Saskatchewan and other Canadian provinces have previously been underestimated and are now appreciated.