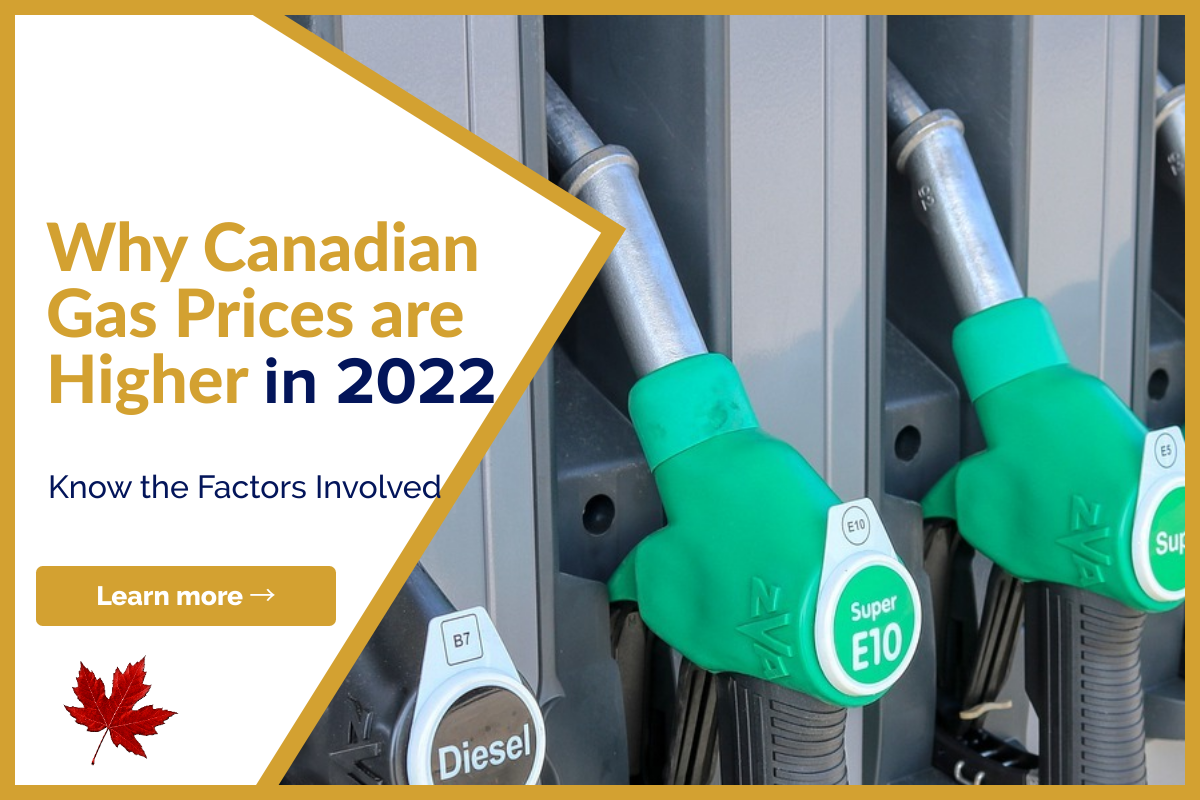 Now you can listen to our blog post, “Why Canadian Gas Prices are Higher Than Ever?” while on the go.

If you are one of the 27 million Canadians who have a driver’s license, then you may already know that gasoline prices are at an all-time high. Gas prices in Toronto are set to surge to a new level of 167.0 cents. In Victoria, a litre of gasoline already costs as high as 194.9 cents.

So, in this article, we will explore why Canadian gas prices are increasing and what are the main reasons behind it  Continue reading to know the nitty-gritty of the gasoline price rise.

For us, there are basically three reasons why Canadian gas prices are higher than ever. These include:

1) The Ukraine War Sent Oil World Into a Bidding Frenzy

It is not Russia’s invasion of Ukraine that sent oil prices into a tizzy, per se, but the avalanche of sanctions that the world has imposed on the country in response. So far, oil and gas have not been strictly sanctioned by the international community. Although Canada has banned oil imports from Russia on Monday, much of Western Europe is so dependent on Russian oil that they cannot turn off the taps without sending their own economies to loss.

However, Russia’s financial isolation from the rest of the world is causing western energy firms to pull out of the Russian market. For instance, Shell, BP, and Exxon-Mobil among others are announcing plans to hightail it out of Siberia. So, even if virtually no government sanctions Russian oil directly, the net effect is that it is getting harder and harder for Russia to sell its oil abroad.

Russia is one of the world’s largest oil producers under normal circumstances. By abruptly pulling most of that Russian oil from the global market, refineries and other oil importers are now scrambling for what’s left, resulting in higher prices.

2) The World Economy is Reopening After Covid-19

Yes, the Canadian gas prices were already sky-high before a single shot was fired in Ukraine. Before the invasion, Toronto gas prices were already crossing historic highs above $1.60 per litre. One of the main reasons behind this was the reopening of the world economy which was waking up from two years of COVID lockdowns and burning way more oil as a consequence.

For instance, almost all of the civil services staff were ordered to come back to the office. This means they all will be commuting and buying more gas to run their cars.

Additionally, the oil guzzling cruise industry is also resuming its operations which were stopped due to COVID. So, the airlines and jet engines, around the world, are ready to be fired up for the first time in months. Thus, they are desperate for fuel, resulting in high oil demand.

3) Oil Production Remains at a Standstill

The cruise industry and the civil service may have returned to normal, but the energy sector has not. It’s proving extremely difficult to get oilfields up and running again after they were put into mothballs during the pandemic.

In previous years, this would have been the time for American shale oil production to save the planet. Shale oil refers to vast swaths of previously unreachable U.S. petroleum deposits that Americans have only lately discovered how to extract through fracking. In the years leading up to the COVID-19 epidemic, technology was the sole reason the United States was able to become the world’s greatest oil producer.

However, investors are wary of increasing output this time because the shale sector completely lost its shorts in the first years of 2020. The OPEC members are gradually increasing production, but not nearly enough to restore normal pricing (which is the point; they are a cartel, after all).

Neither can Canadian oil production turn on a dime. The cost of extracting oil from sand in northern Alberta is high, and it takes a long time to get started. So, while Alberta stands to make a lot of money from high oil prices, it’s not like they can just drill a bunch of pumpjacks in the ground and produce more oil.

All of the aforementioned reasons are the result of international forces that are beyond our control. Regardless of what Canada says or does in terms of energy policy, our gasoline will undoubtedly increase in price once a big oil producer, such as Russia, is crowbarred out of the global market.